Holly Holm has made UFC history tonight against one of the most dominating women's mixed martial artists in the world. 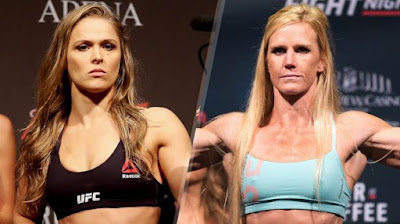 It was a classic battle between superior stand up game versus world class ground game! Ronda Rousey was simply out classed in striking. Ronda has never been against an opponent of Holly's caliber. The 1st round was Holly demonstrating her ability to maintain her distance. Even though there where moments when Holly was taken to the ground where clearly she was able to defend herself. Holly at one point did take Ronda down to the ground and got right back with little problem. The outcome was an exciting perfectly executed plan delivered by Holly Holm.

After the entire first round of Ronda getting lite up, In round 2, Holly saw the opening and threw the devastating head kick that knocked out Ronda.
Holly Holm now has an undefeated record with 10 wins 0 losses.
Posted by Unknown