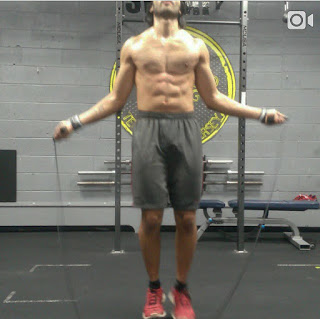 Where did it originate?

Let's go back in time where human beings didn't have cars, bicycles, or roller blades and traveled everywhere on foot. Humans had to run on unleveled terrain and had the need to jump over objects to get to food or shelter. According to the Jump Rope Institute (http://www.jumpropeinstitute.com/), we instintively did this movement to catch prey or move around a constantly changing environment. This reflex played a big role to the survival of mankind.

According to historians, the jump rope first emerged in early ancient Egypt where vines or flexible bamboo was used to jump over as a type of game. From Egypt to China to Europe to North America, it spread across the globe and hasn't stopped yet.

Due to movies and T.V. many assume jump roping is always associated only with boxers or MMA fighters. In reality, jump roping is key to any athlete in any sport. Learning to jump rope not only benefits your cardiovascular system, it also has huge benefits for your nervous system. Jumping rope increases your reflexes, alertness, balance and coordination without destroying your knees. The load on your knees is less than the load per step while running. Staying sharp while under a fatigued state is of high importance to all sports. Athletes need to stay sharp the entire game. 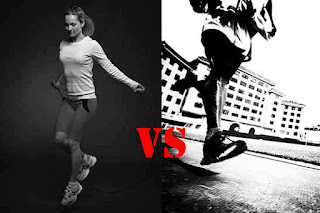 Fact: You’d have to run an eight-minute mile to work off more calories than you’d burn jumping rope.
Let's face it, we don't all live in beautiful all year round warm climate. Many of us have to deal with harsh blizzards and icy below 0 degree temperatures. Or let's look at the other perspective where people may have the warm weather but are stuck indoors due to a severe thunderstorm. Although being the Spartan that I am, some snow outside does make running outdoors rather enjoyable, not all of us mind tackling the elements. Calorie for Calorie, you can burn more calories jumping rope in a shorter amount of time than running. Instead of losing out on your fitness, GRAB A JUMP ROPE!

How to Jump Rope?

Don't worry troops! I've got you covered! Check out the video below of 45 ways to jump rope.

Alright troops, there you have it! Just add 5-10 minutes of jump rope a day with your workouts and you will get you closer to the Ripped Spartan bod we all want. Get roping!