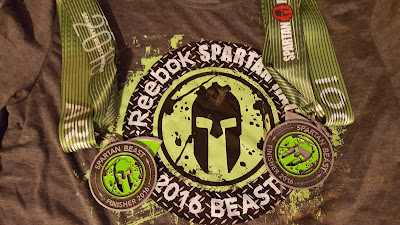 The time to tackle this green monster finally came back to Jersey and it was not what people expected. Many Spartans who tackled last year's NJ Beast felt it had not been "too difficult" and that it seemed similar to the NJ Spartan Super.

Well, needless to say, this year was going to be a different story. Norm Koch, with his "Little Knife" and his bear friends, decided to take things up a notch. Here's how it went down!

As I walked over to the registration tents to pick up my Bib, all I kept hearing was how last year's Beast was "easy". However, we were all in for a nice surprise when we discovered it would be a 14+ mile course. Not only was the mileage a factor, but there was a creative approach on how they used the landscape.

The beginning of the course set the pace by going on an incline right off the bat (most SR do). As the course continued it felt as if there were no obstacles or what seemed to be a handful, which was not the case. There were plenty of obstacles; they were spread out so well, but our legs were still shot from going up that whenever an obstacle was reached, it felt like a blur. Now, let's talk about the obstacles!

Since it is known that Norm Koch secretly has a weather machine, it was obvious he would make it rain the night before to make some obstacles that much harder. For starters, the sandbags were heavier; the sled pulls were a pain to pull, both of them; the Hercules hoist though wasn't so bad. The water obstacles were all cold and muddy. The carries, (Sandbag, log, bucket), were all there. The barbwires (2 of them) were fine. All the climbs were utilized, rope, A-Frame, monkey bars, Multi-rig, inverted wall. When you really stop and think about it, it was obstacles galore! Nearly every obstacle known to Spartan was utilized on this course!


See my very detailed and accurate map below.

Sunday was a whole new ball game. The on and off rain and the cold did play a small factor on warping the course. The course was a bit more technical to navigate through, descends were more slick causing me to take a few tumbles. But really the main difference was the cold.

See below a summary meme that should accurately depict this past weekend. 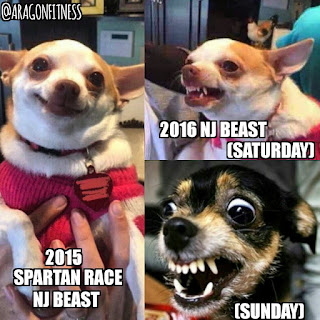 All in all it was a challenging course that gave many racers a small taste of what Killington is like (the 2014 one, not the 2015 one).

Congratulations to all the spartans who tackled the NJ Ultra and Beast, it was a doozy!

See you all at the next race! AROO! 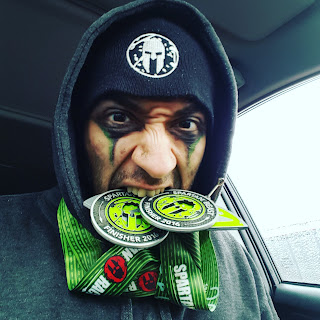